And because we did have the Clow Book featured here (even though it was just a filler post at the first place). Then we also can’t miss the Sakura Book! Desho? 😀

It’s a pretty in pink! And kinda shabby looking XD I both got this  Sakura Book and the Clow on the same year, (around 2012) and it was already this worn out. So maintaining and preserving them was a tough work.

This is how it looks inside.Compared to the Clow book, which is a replica of a book. On the other hand, Sakura is made of hard and thick plastic, even the Crest is plastic unlike with the Clow which is made of metal. Also Sakura has hinges as a book spine and full of screws. Basically this one is more of a toy type rather than a book itself.

The left side is not painted though I wished they did. The bottom part is where the switch for the game mode and battery is located. It uses 2 triple A batteries btw. Its hard to comprehend the switch area because everything is too white but it says Off, 1 and 2 starting from the base. We will take a closer look at that and how the game play is later.

The Sakura Cards. All looking yummy in pink.

Now breaking down the game play one by one.

(a) You just have to press simultaneously both the Sun and Moon buttons below.

(b) It will say a monologue about choosing a card , won’t matter whatever you choose.

(c) After inserting the card you will hear a monologue again (this time saying about having the right card) then the book will light up.

(d) Press the center and bigger button asap before the light turns off. (Because if not, you will repeat all over again)

(e) It will play a music theme and this time a monologue saying “yatta de!”. And yeah, you’re done with game 1.

(a) Is basically the same as game 1 you gotta choose the right card whatever that is. You don’t have to press those 2 small buttons anymore! Right after you change the switch to #2 the game starts!

(b) However the difference is it beeps and the light blinks till you’re finish with the game.

(c) As you insert the wrong cards it keeps on saying “No” until you get the right one.

(d) You will hear the same monologue (game 1 (c)). Plays the same music theme (no yatta though) and viola! you’re done with game 2.

And btw as the beep gets faster it indicates that you are almost having the right card.

However, with all the efforts of explaining (and typing) I actually did have a short video for the game lol. I was reluctant, really really reluctant to upload it, since I am so bad with videos. I am also terribly sorry for all the noises around. As you may not know I have a very lively neighborhood and so does my air-condition which sounds like a sinking submarine. Anyways…here it goes. 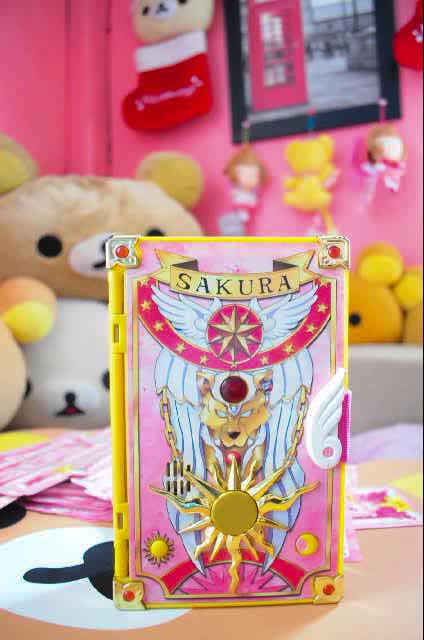 So yeah, roughly that’s all of it the Sakura Book has to offer. Generally it’s a toy that you have to play with. It’s cute and super rare, well nowadays. As a fan, I am happy of course that I got them early before they became a rare-to-find-goodies and that I got something that is still working like a baws. The games are also very simple, just right for kids and kids at heart. Well, it’s kinda fun to play like this once in a while XD. Anyways hope you liked the Sakura Book just as much with the Clow! They are both definitely a lovely grails for CCS fans.