My inner child is screaming *I cri!!!! They’re finally here! *Sits in the corner of my room* 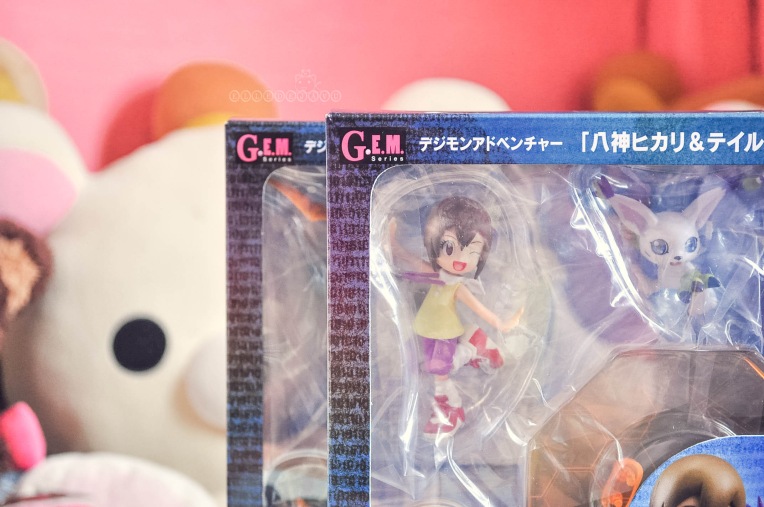 HAHAHA I’m totally out of words and extremly excited now with these pair since they were announced! I love Digimon and it was one of the most amazing anime in my highschool years. I did by the way previewed as well Taichi and Yamato last year, just check out the link if you wanna see them. ^_^

The first batch still has this Bonus cards just like with the first ones, Taichi and Yamato. I don’t even know where to start off lol. Okay KEEP CALM, but before everything else warning you with spam post ahead. Alright moving on!

I guess ladies first. So starting off with Taichi’s cute little sister, Hikari Yagami and her partner Tailmon! 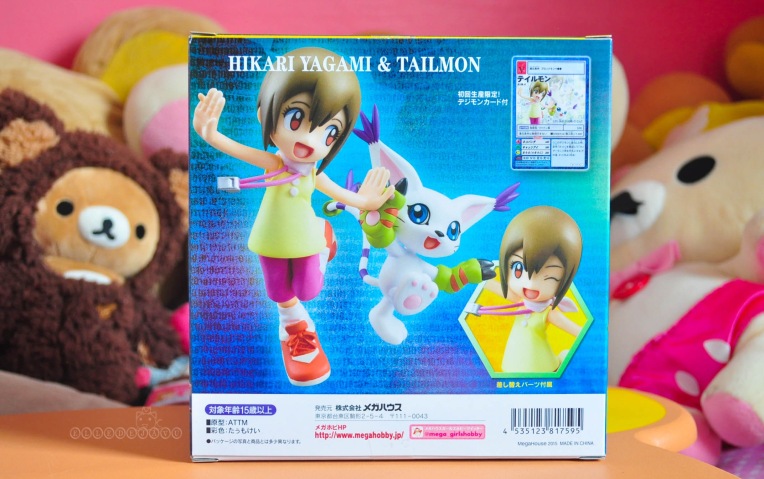 The set comes in with Hikari herself, Tailmon, a base and an extra face.

Their bases is pretty much different, not just in the color but also in style. Hikari and Takeru’s don’t have back supports but instead they have pegholes by the feet. And I actually find this version more convenient compared to Taichi and Yamato’s. The base of Hikari is also the widest so far probably because she and Tailmon stands side by side so it consumes more space compared to the others.

This is too cute to handle. OMG. 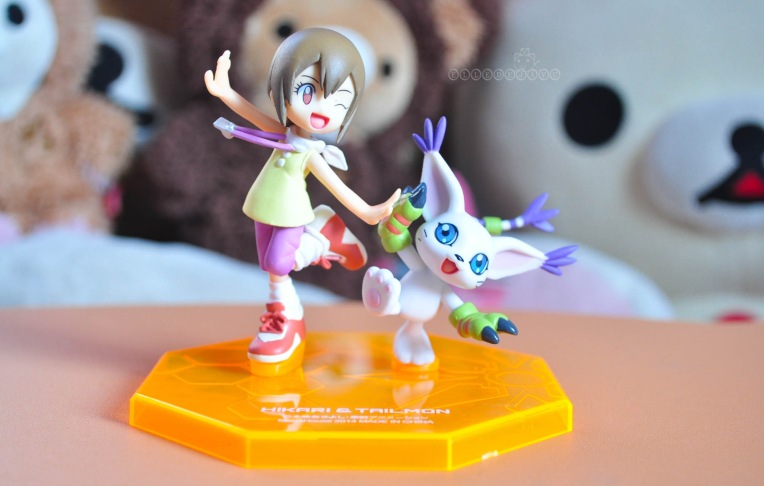 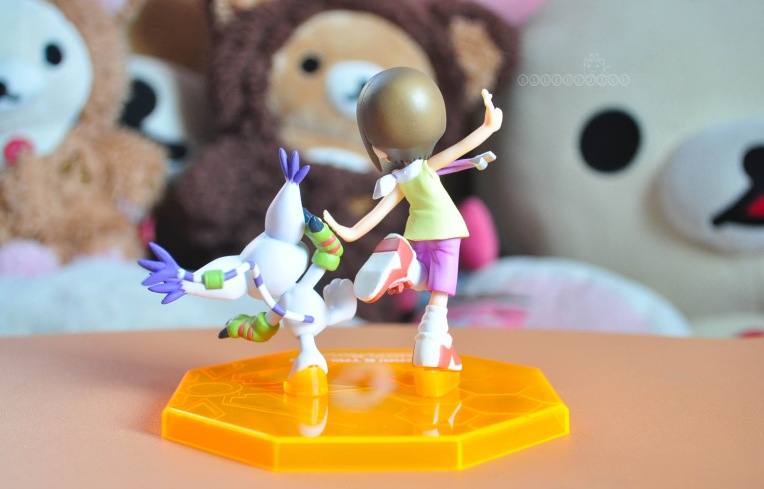 Closing in with Tailmon. She is my second favorite of all Digimons well because she is a cat and I love cats 🙂 Plus her evolve form Angewomon is just too beautiful! 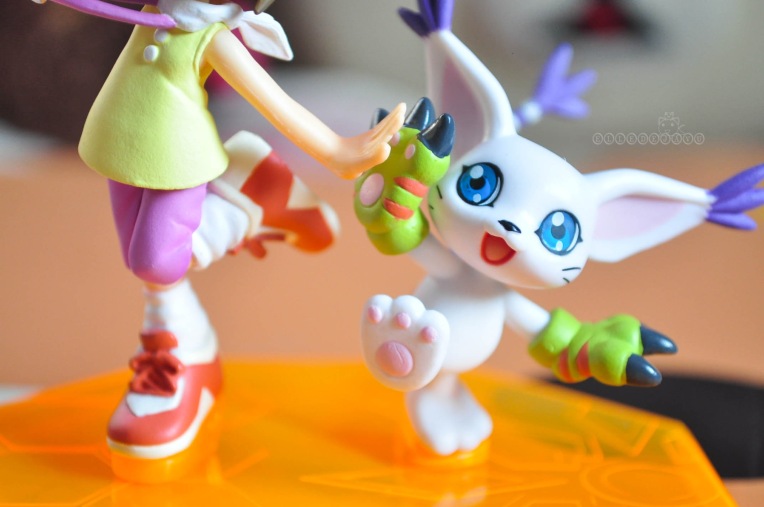 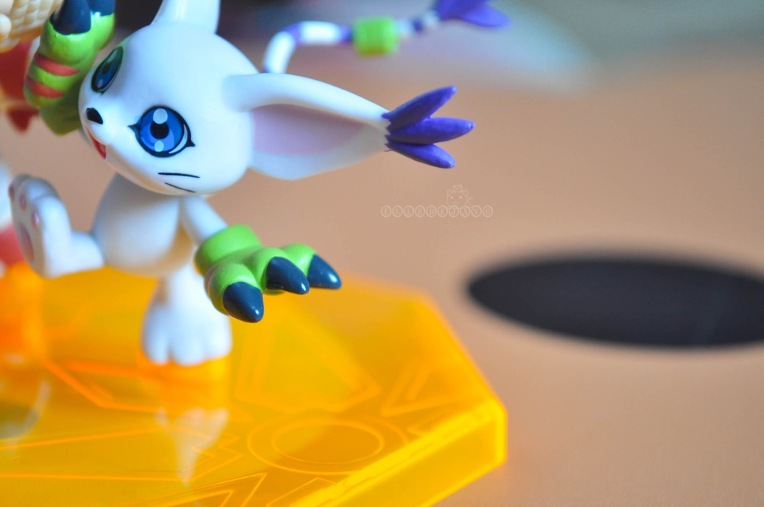 Now onto Hikari. Another kawaii little sister that your surely gonna love! She is a sweet kid and loves her brother so much.

Her extra face is winking (same with Taichi) but I noticed that she is the only with a different kind of “extra”. Its just a faceplate with no hair attached. Hikari’s version looks the same to what nendoroids have unlike with the other 3 because they have literally “extra heads” not just a face. Anyways I really don’t know why either? :O 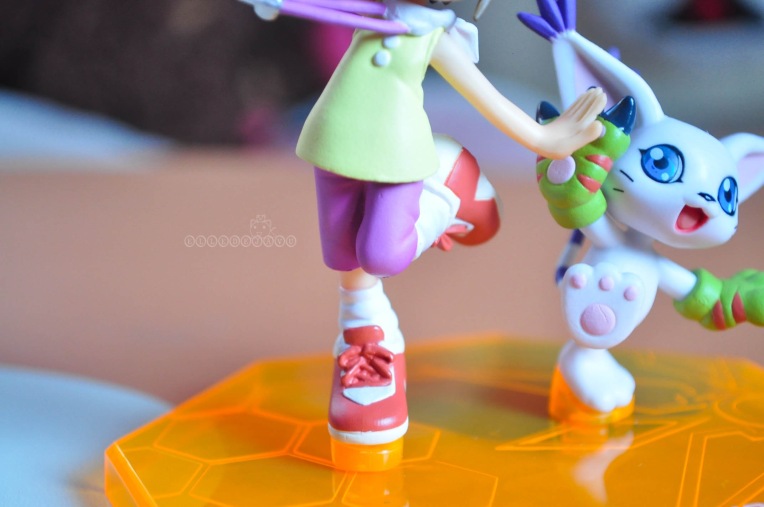 The clapping hands concept with Tailmon is so cute! Which reminds me of  her brother Taichi and Agumon, they look like the playful kind of partners. 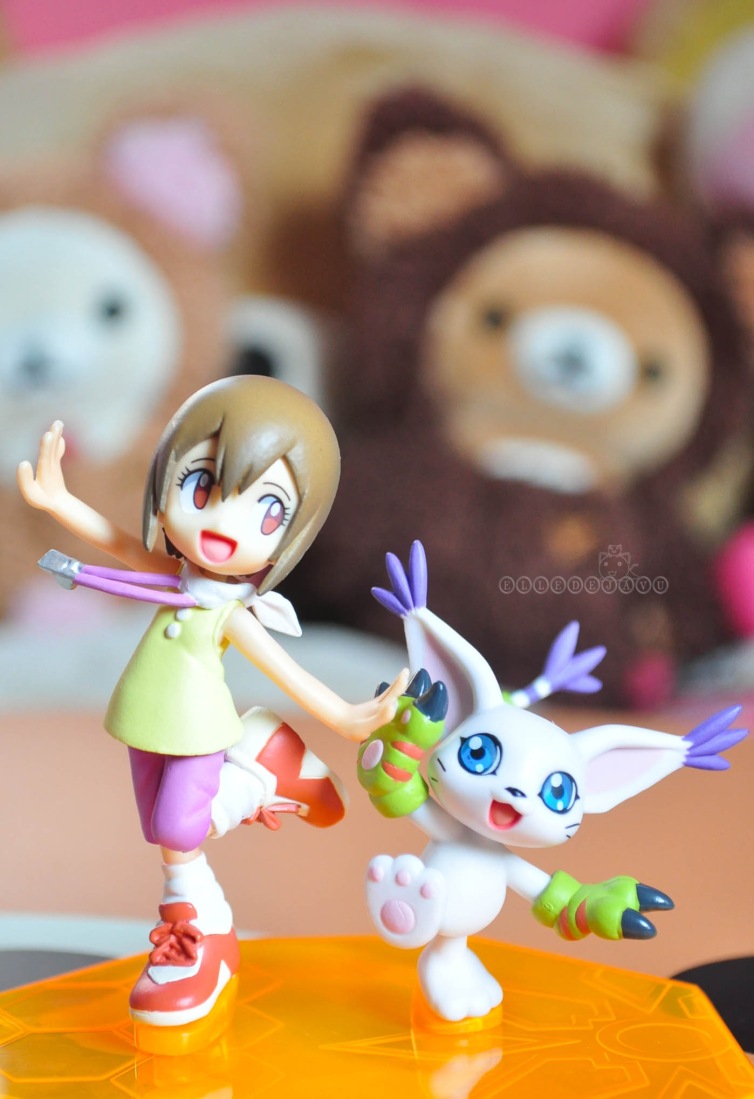 Alright so we are done with Hikari, now continuing with Yamato’s little brother this time, Takeru Takaishi or more known as “TK”. 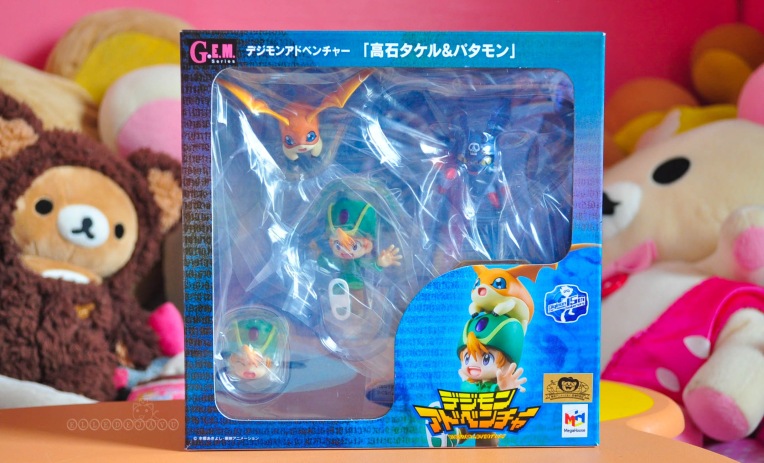 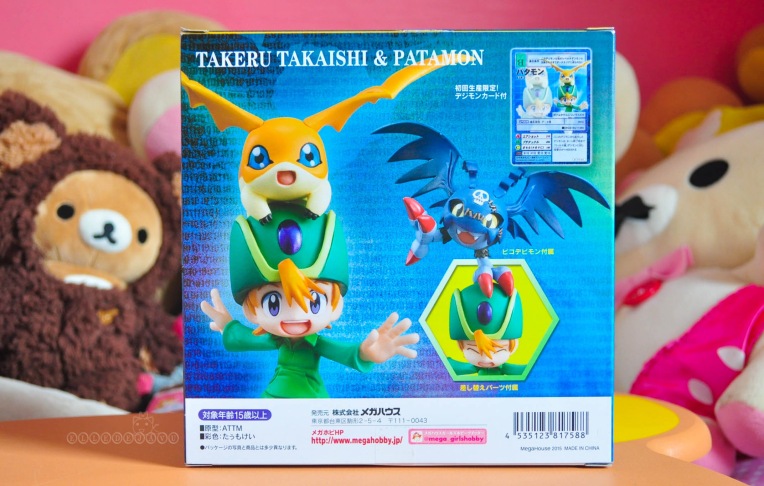 Takeru’s set is pretty much the same with Hikari. However his base is smaller compared to hers and like I said earlier he has an “extra head” not just a faceplate. And besides his partner Patamon, he also has DemiDevimon in the set which is pretty cool! 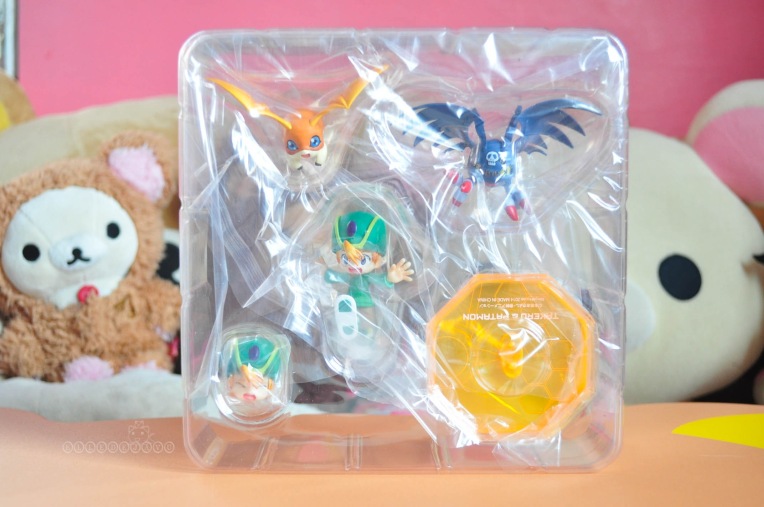 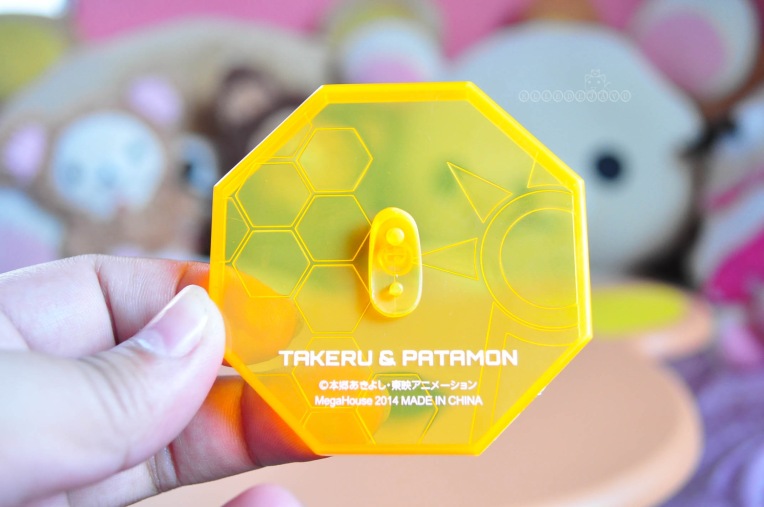 Patamon is too adorable I want to squish him..oh that cute tiny butt lol  >.<

Patamon is of course my favorite of all the Digimons! He is so cute and irresistibly chubby, I would love to have him as my partner as well! And also when he evolves into that gorgeous Angemon, which seems to be the “male” counter part of Angewomon.

Takeru’s mouthline has the same texture to Taichi’s. Looking at it closely is kinda awkward. I don’t know, I don’t like it much with how they did the mouth part. Anyways Takeru is the youngest of all the Chosen Children, so he’s being treated most of the time like a baby by everyone. And besides Yamato, is also too protective to him since he knows that Takeru has gone through some rough times (Devimon Arc). 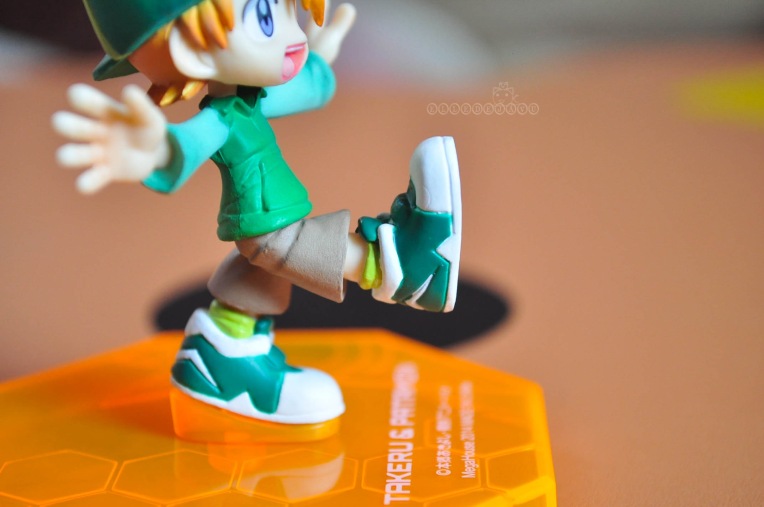 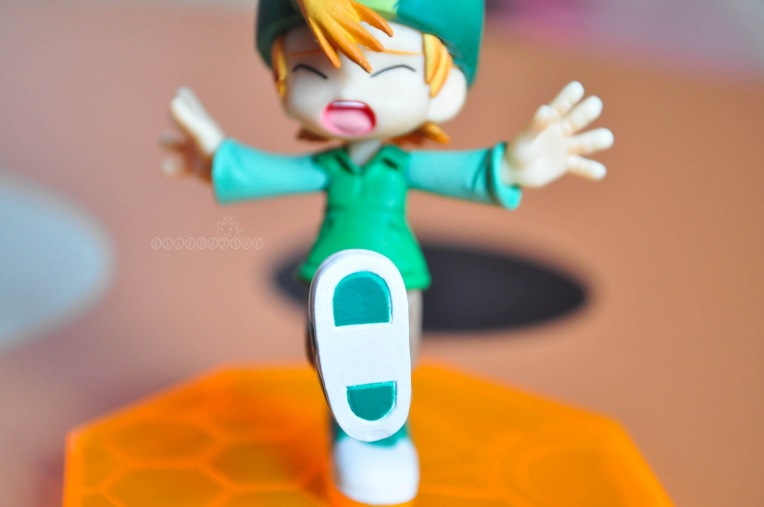 The extra head goes with DemiDevimon, its like a painful expression since DemiDevimon is grabbing him by the head, just like a prey and its predator. Although his body gesture seems to not go along with the situation >.<

But in terms of DemiDevimon’s detailing it’s quite imporessive. I actually liked it much and would rate as the best part of the entire set. Nicely done and painted!

Takeru and Patamon’s concept is adorable in many ways. His partner Digimon resting on his head looks too cute, and they look like to be having so much fun together savoring their every Digi World adventures. 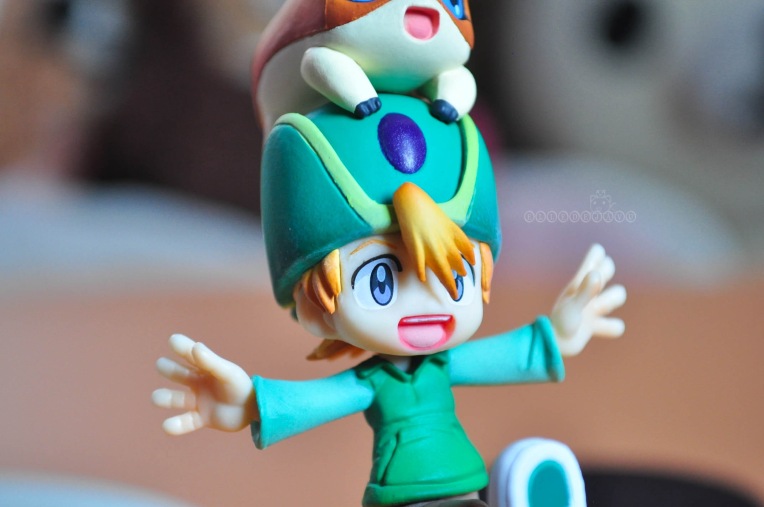 YAS and I am done with this batch. I totally aprove these figures, a must have to every Digimon fans out there. Even in a 1/10 scale they would still be an awesome addition to your displays and I can’t wait till the whole gang is complete and looking forward to it very soon! So did you like them too?